The Strange Ones in The Dome: Bowie in Brighton 1973

The conventional wisdom is that it was Top of the Pops: "that moment" when the world shifted a little on its axis and jolted the startled weird kids, misfits, and proto-queer freaks into a parallel universe, when nothing would, could, ever be the same again. 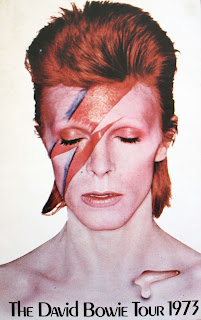 Actually it was "Lift-Off with Ayshea" a couple of weeks before the legendary TOTP appearance that sent me spinning. ITV was a slightly grubby channel and while Lift-Off didn't match TOTP's glitz, it offered an extra pop fix albeit one that rarely seemed to vary from the usual diet of Donny, David and Michael, though you could hope for a dose of T Rex, The Sweet and Slade amongst the girls' stuff.

But the 15th of June 1972 was different. I was suddenly transfixed, staring goggle-eyed at this man-not-man in a skin-tight sequinned leotard affair, crazy haired singing a crazy song about aliens and not telling your poppa 'cause he'd get us locked up in fright and was he... was he... what was he? Oh - that guy, who did Space Oddity with the Stylophone a quarter of my lifetime ago? Him?

It's a cliche told by every Bowie freak of that era. But sometimes cliches are true: it was the last summer at Sacred Heart convent primary school and the next day it was "Did you see...?" Yes they all had. "Ohhh, he's queeeeeerrr," "Weirdo," "Urhh..." But I couldn't stop thinking about him, talking about him, wanting to find out more about him, defending him from the sneers of the massed hordes of teenypop droolers.

By the time Starman appeared on "that" TOTP on 6th July, I was already a fully-fledged fan. And yes, he was queer, camping it up with Ronson, giving the heebie-jeebies to a million parents across the country, terrifying some kids and fanning that tiny little spark of hope in others that there was another real life to be had, despite what we were taught. Queer, queer, queer, queer, queer, and nothing you could say would make me love him less.

All the girls wanted to marry Donny, David, Les, Eric or whichever other Bay City Roller took their eye this week, but I didn't want to marry Bowie. I didn't want to hold his hand or fantasise about what it might be like to snog him (or worse), in the unhealthy way that only 11 year old girls can about thankfully (generally) unattainable targets of affection. No, I had loftier ambitions. I wanted to BE Bowie. I wanted to transcend this mundane life of being spat at in the street outside the Deluxe Leisure Centre in Hastings by the big boys for being weird, being punched at the youth club for looking funny at some kid, being elbowed aside when you won a few pennies on the Pier slots for a leather-jacketed youth to claim your winnings, having to endure weekly Mass and its hypocritical parade of adulterous gossips and predatory priests whose "touching up" of the altar boys was whispered and sniggered about, and the apparently inevitable trajectory of a life of normality followed by a probably all-too-welcome death. No. I wanted another life; I wanted another world. 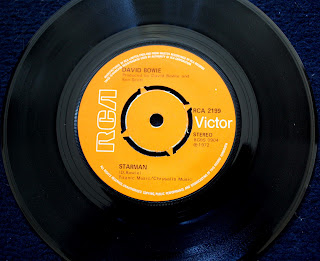 I had long hair, very long, and though I hated it I felt sentimentally attached as I'd been growing it since I was little for a reason unknown. A picture of Bowie in hand and a visit to the hairdressers later and I had an approximation of Bowie's spiky mullet, although dying it orange seemed a step too far.

Pocket money saved up, and my very first self-purchased, all on my own, with my very own money, 35p (expensive at the time) 7" single from The Disc Jockey in Queen's Road was John I'm Only Dancing. Bowie's subtle but sexually charged performance, the blatant suggestion of bisexuality, the way you could sing along and charge every line with your own meaning "she turns me on, but I'm only dancing" lend what's on the surface a pretty slight song a deeper resonance.

Christmas '72 gave me the Ziggy Stardust album, learning all the lyrics by heart, singing along loudly, flipping it over and over on the dansette, catching my mother singing extracts from it in the kitchen as a result of sheer over-exposure.

And then came the news I'd been awaiting: Bowie was playing in Brighton. Off we all packed in the car for the day, my mother and little sister off on an extended shopping trip while my father waited patiently as we queued for five tantalisingly long hours in New Road for the box office.

And what a queue. Men-not-men seven feet tall in their platforms, some screaming camply in sequins, glitter and makeup, others in denim flares with kohl-eyed girls in Biba outfits, purple lipstick and white tights, or "dead legs" as my mother would call them. These people were freaks, the un-normal, from another world, Bowie World.

It was looking like we'd be unlucky, but we got two of the very last tickets, in the back row of the circle, £1.20 each, then we went to the Lyons Corner Shop on the corner with North Road for a well-deserved cuppa.

£1.20. Might as well have been worth a million pounds. I had a ticket to see David Bowie! 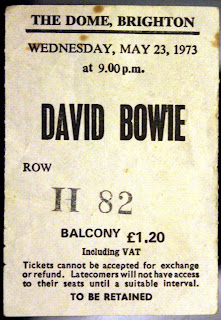 And finally the day came. 23rd May 1973. I wore my green denim flares with bullet-shaped shiny silver studs down the side seams and raised studs on the flap over the flies, and silver nail varnish (an experiment that didn't last too long, albeit a bit longer than the brown lipstick). My father drove to Brighton and as he and I made our way up to our seats in the gods, the excitement was almost unbearable.

A film came on with some odd dream-like sequences, and a bit where a woman's eye was sliced with a razor led the whole Dome to let out a collective "Urrrhh!" then some weird fairground music and oh this was getting annoying... Then suddenly the Spiders from Mars appeared and as Bowie rushed onto the stage, the crowd below surged forward frantically down the aisles and across the seats, raising their hands to the leper messiah. I managed not to be sick with excitement as the Spiders tore into the set, trying to dance in between the seats and taking as much of this whole scene in as I could, Bowie resplendent with his golden disc on his forehead, Ronson's electric blowjob, Garson bashing the piano discordantly in the Aladdin Sane solo, Bowie's outrageous Japanese suit ripped in two, and the almighty collective roar that resonated round the domed roof when he sang on Drive In Saturday about "the strange ones in the dome"....

It was over all too quickly, but this was it: I knew there was another life, another world because I'd seen it, here in Brighton Dome. It wasn't just about Bowie, it was the realisation that you could step outside of stifling conformity, normality and find that other world for yourself. It was just Bowie who lit the way for me and unnumerable others.

After that, nothing could be, would be, should be the same ever, ever again -- at least for this strange one in The Dome.