Stranded in the bush of thorns 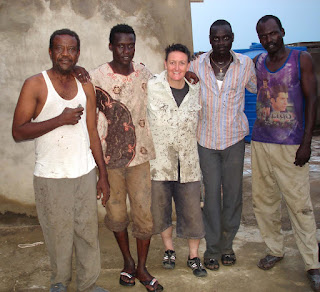 It's a funny old business, recruiting for the new radio station in Kurmuk. Normal rules do not apply. We had seventeen application CVs from the town, which is encouraging, but it's only when you sit down and read through them that you realise the majority consist of a hand-written page simply pleading “give me a job”, and bizarrely including so-called references written in their own hand. Only two actually said anything useful about themselves and mentioned why they might want to work in community radio, so it was quite a challenge to shortlist eight candidates, looking for a reason why one person who scored 13 out of a possible 50 marks in the shortlisting criteria should be bumped up a point and be interviewed, versus another with the same score.

So on Sunday I walked around town, sticky tape and A4 announcements in hand, flyposting up the list of interviewees. No such thing as confidentiality when you're going for a job here – no throwing a sly sickie or taking a day's annual leave for 'gardening' – oh no, your employer's going to hear about it alright, and so's the rest of the town.

In the hope of drawing some more promising candidates we decided to broaden the recruitment to Damazin, a university town further north, anything between 120 to 200km away, depending on who you asked, but with a consensus that it's four hours' drive away – in the dry season.

I was keen to go as soon as possible, as fitting all the recruitment in with the training and station launch in September is ludicrously tight, and it's also the only place we could buy a table for the studio, but it was always “Maybe tomorrow,” until Tuesday came, when it was finally “Today”. Great, what time? “Now!” - cue mad rush to pick up bags (already packed in preparation), unplug and grab laptop, don't forget malaria tablets etc – then “now” turned into two hours of faffing, picking up and dropping off people, buying bread and water for the journey etc. until we were finally away at 11am.

So the six of us jammed into a Land Rover embarked on another Clarkson-esque ride across river beds, up sandbanks, down mudslides, through fords, brain-bumping on rocky tracks, slithering, slooshing and swerving through treacherous mud. It had rained on Monday evening, not heavily but consistently, and the terrain largely consisted of sandy black earth, which is yielding and powdery when dry, and viscous and clinging when wet. And boy, was this wet.

Three times we had to extricate the van from deep mud, digging, pushing, heaving and hunting foliage to give the wheels a vague chance of a grip, until we were all splattered head to foot in mud. We must have looked quite a sight as we pulled into a village en route at 4pm to sit down wearily for a bowl of ful – bean stew topped with chopped red onion eaten communally by dipping in flat bread (this I can cope with but I have yet to indulge in the communal public cup, or worse – ditch water).

Our driver Jamel had abandoned the cautious approach to driving, taking instead a full-on headlong run at the muddiest patches, but now the punishment of the engine was taking its toll, and it started overheating every five minutes, to be cooled down with bottles of ditch water. At one point he decided against a particularly muddy stretch and instead steamed through a wood of thorn trees, and when I say through, that's exactly what he did, knocking over any tree in our way as if we were in a tank.

And then, just before 7pm as dusk was falling – disaster. The engine overheated, coughed, spluttered – and died, right in the middle of some thorn bushes. Someone managed to get a signal on the satellite phone and called back to base, who were going to send a pickup truck to rescue us. However, it was soon apparent that this wasn't to be til the morning, so there we were, six of us, caked in mud, camped down inside a dead Land Rover. It was a toss-up between keeping the windows ajar and letting the mossies in, or shut and suffocating to death with our combined pig-heat and malodour from the day's journey, so mossies it was.

If you've ever shared a confined sleeping space with five other people, it's not that pleasant, specially when they all take turns to snore loudly, and not helped by the fact that my teatime beans kept making a break for the border, thankfully just noisily rather then whiffily, though there was some urgent window-opening every time I dropped off and another one accidentally popped out.

Come first light we all surfaced, stretched, joints clicked back into place and another failed attempt made to start the engine. We took revenge on our tiny tormenters by rendering them bloody smears on the van windows, and come 8.15am four of the team decided to walk to the next village to get help, leaving co-driver Abbas and myself as the van guards. Thankfully I had some escapist reading matter – Michael Palin's Monty Python diaries, transporting me back to a chaotic mid-70s Britain of three-day weeks, power cuts, dead parrots and the Ministry of Silly Walks – a perfect antidote to being stranded in a conked-out van in the middle of a thorn bush.

12.30 came and we finally heard our valiant rescuer Adam approaching, only to take more than thirty minutes to find a way to reach us without getting bogged down. We transferred the entire contents of the van, left the keys in it and abandoned it in the thorn bush. An hour later we reached the next village to find our other comrades there, footsore but fed and watered, and having commandeered a tractor to rescue the van.

And so we reached Damazin by 6.45pm, nearly 32 hours after we left, muddy, scratched, bitten, stinking and knackered. And how many job applications were waiting for me there? Two.

So next day, time to work out how I was going to get back for interviews on Monday. There may have been a plane on Saturday, Sunday, or was it Thursday? And if it rained, it wouldn't land anyway. Decision time – Adam was heading back to Kurmuk, so quick packing and an hour and a half in town to find a studio table (700 Sudanese pounds/ £175 for something you'd sniff at paying a tenner for at MFI) and off through the mud for home.

Come 3.30 and we were still eight hours from base. We stopped off in a village where we could get a tukul for the night and met up with Jamel who'd driven us as far as the bush of thorns. The prospect of sharing a mud hut with two less than fragrant guys was hardly appealing but needs must, and I wasn't exactly Persil-fresh myself.

Ready to hit the road by 7.30 next morning, and off we set in convoy with a pickup truck with six people bouncing around in the back. We reached the thorn bushes where the ground had now turned to swamp. So it was drive a hundred yards, stop, survey the terrain, go on, get towed out the mud, crash and bounce over some trees, all out and push, tow the other van out the mud, wash off the splatters in a puddle, stop-start for nigh on three hours. Adam's pedal-to-the-floor approach to driving sailed us over some of the worst patches, careering, swerving and punishing the suspension, and burning out the reverse gear.

Although my Arabic is severely limited to asking for a coffee, please and thank you, and Adam's English not much better, the whoops, cheers and relieved laughter we shared communicated our amazement at finally getting back in one piece, filthy and smelly again, thirty hours after we left Damazin.

So were four days of mud, sweat and toil worth it for the two job applications that were waiting for me? Sadly, no. But hey, the overpriced studio table's just fine – battered and scratched, but mission accomplished.

Wow! You crazee chick!! Makes me feel so dull, it's soothing. Hope you're fresh again, girlfriend!

You my dear can NEVER be dull! And wouldn't exactly say I'm fresh again either - fresh and Sudan don't exactly go together....