Nobody said it was gonna be easy.... 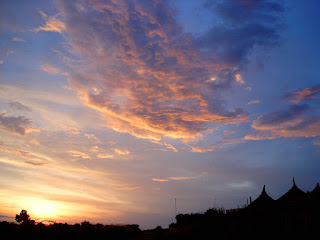 I’m sitting under a huge gnarled tree at the roadside to write this, green hills with black rocky outcrops behind me and the town football field below, the blue Ethiopian mountains shrouded in low cloud in the distance, and the company of curious passers-by stopping to see what I’m doing.

And I’m just wondering now if anything else can go wrong here in beautiful Kurmuk. Short of anyone dying or getting injured (well only a little bit, more of that later), just about anything that could have gone wrong since I’ve been here has.

Below is the story of my abortive trip to Damazin, getting intimately acquainted with a very particular type of icky black mud around these parts, and spending a less than comfortable night amongst the thorn trees. It was a bit of an ordeal, so when I returned I was in extreme need of a little relaxation and recreation.

Every Saturday night one of the international medical charities hosts the only party in town (well, that I’m aware of anyhow) with the best mix of African music, great company, plenty of Ethiopian Bedele beer, dancing til you drop, and a mangy disobedient dog which had adopted the compound as its home. Unfortunately the night also involves a roasted goat, which pongs appallingly as it sizzles on the barbecue, occasional ribs, legs and other body parts periodically being thrust under your nose on a huge platter.

That Saturday was particularly lively as one of the staff had completed her year in Sudan and was being given an enthusiastic sendoff by all her colleagues and friends before returning to Ireland, so in the prevailing spirit of harmony I went against my better judgment of being nice to children and dogs, and decided to pat the mangy hound, only to be rewarded with a tenacious bite on the hand, dragging the wretched thing several feet before it decided to let go. I suppose if you’re going to be bitten by a semi-wild dog, being surrounded by doctors and medics is the best place for it. Much concern, enough blood to make it look good, but no real damage done.

Next day, with hand swollen to Mr Blobby-like proportions, two canine tooth puncture marks throbbing, I popped down to the radio studio, only to find a broken window, and a mixing-desk shaped gap in the studio kit. I’d been hearing about a spate of thefts in the area during the previous week (including forty bags of cement – that takes some doing!) so it seems we were the latest victims.

It was all taken very seriously by the police, who sent round Kurmuk’s finest to look, tut and examine cable ends for clues. A final tally of the losses is actually pretty painful, considering the kit’s got to be shipped in from South Africa – mixer, laptop, recorder, pair of cans, mic and lots of software discs – a $10k haul, in fact. Ouch. Fortunately our technician Matt was coming in on Tuesday’s weekly flight, ostensibly to finish off the studio setup, now to replace and repair whatever he could in the time available, and to carry out an assessment of what was stolen.

Unfortunately, Monday night saw torrential rains so no landing for the single prop plane on the rudimentary airstrip on Tuesday. The rest of the day stayed wet but thankfully held off just long enough on Wednesday for the pilot to take a bold chance on landing, urged on by the passengers who had no intention of turning back a second time. The logistics of organising anything here are convoluted, specially during the rainy season, when a beautiful bright day can degenerate to thunder, lightning and slates of rain by mid-morning.

So the rest of the time was spent recruiting, interviewing and training new staff for the radio station. Our scheduled on-air date is September 15th, so taking four or five completely green staff and training them from scratch in just four weeks is quite a challenge. And to give them their due, after one week they’ve been making vox pops, interviewing each other and people in town, recording and editing, learning the philosophy of community radio, news values, journalistic ethics and so on. Let’s just see if any of it actually sticks.

But the main downside of this lovely place is the sheer dullness and predictability of the food. Unfortunately we can’t cook for ourselves at base camp as it’s a complex process of juggling several cooking pots on a small charcoal stove, so each day, twice a day, you get rice, ugali (the most appalling vegetable dish ever invented, a thick white stodge somewhere between week-old porridge and polenta, and utterly tasteless), if you’re lucky there’s potatoes and sometimes even chips – except they cook those two hours before everything else so they’re stone cold by food time – with either lentils or beans, and unidentifiable dead things in slop.

Eating in the market is equally predictable – ful bean stew with flat bread or Ethopian injera – a fermented pancake-like bread which looks more like an old towel - in fact when I first encountered it in Nairobi, I genuinely thought it was a hand towel and was just about to wipe my hands on it before I was told otherwise.

They say khawajas don’t eat in the market here, and after four days of Bashir’s revenge following lunch at a place where the serving kids smoked and scratched their armpits, I can see why. Mind you, I’ve also eaten at a place where the serving guy smoked and picked his nose, so it doesn’t always follow, and having done my student stint in catering, I also know how foul some of our esteemed eating establishments can be at home behind the scenes, it’s just that here they do it upfront. The mangoes in the market are life-savers though.

So it’s five weeks now and counting, rains permitting, til I get back to Blighty, that psychological point where your mind’s neither fully in one place nor the other. But I’ve met some great people and formed a curious affinity with the ubiquitous goats for their quizzical looks, nosiness and nonchalant attitude to life, and I have to admire anybody who can work out here for any period of time without going slightly deranged at the chaos and the inability to get a straight answer to a direct question.

Oh – and if you were wondering about the mangy dog, it ended up on the barbecue the next week..... I wish.